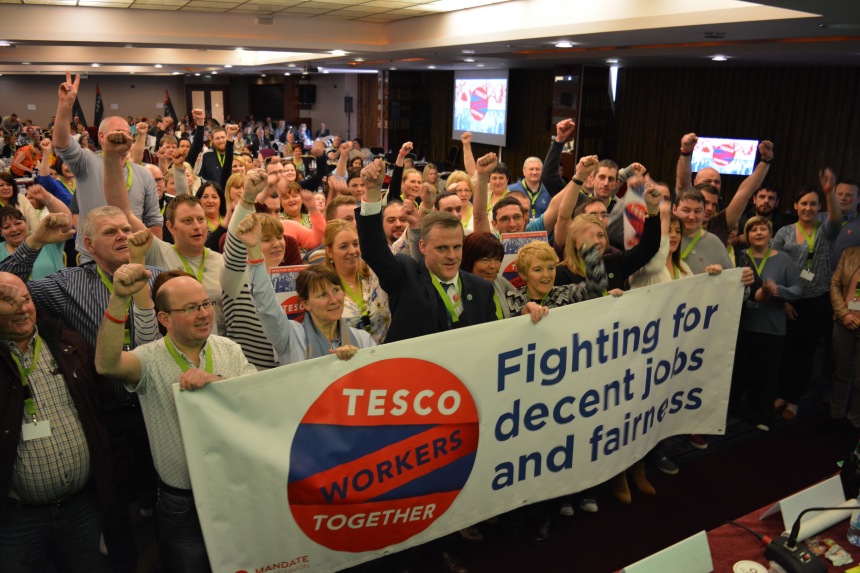 A conference of 300 Mandate Trade Union shop stewards from a range of different retail companies across the Republic of Ireland has today (Sunday, 17th April 2016) called for a union-wide response to attacks by Tesco Ireland on long serving staff members.

Tesco is the largest private sector employer in Ireland with 14,500 staff in 149 stores. Management at the company are threatening to cut wages for staff employed before 1996 by up to 35pc on 16th May 2016.

At the Mandate Biennial Delegate Conference in Galway, an emergency motion was unanimously passed calling on Mandate “to enlist the assistance and solidarity of all trade unions in Ireland to support Tesco workers in their struggle.”

The motion continues by calling on Mandate “to expose and tackle by whatever legitimate means necessary Tesco’s tactics of maximising profits and shareholder value at the expense of maintaining basic decency standards for their own workers.”

Irish Congress of Trade Unions (ICTU) General Secretary, Patricia King, who opened the conference, said the Tesco workers have the full support of the entire trade union movement on the island of Ireland as they fight to maintain decency and fairness in the workplace.

Mandate Assistant General Secretary Gerry Light said, “Tesco’s disgraceful treatment of their longest serving workers has resonated with trade unionists and workers across Ireland. At a time when everybody is talking about an ‘economic recovery’ and Tesco themselves have had an €8bn turnaround in their business in just 12 months, threatening to cut workers’ incomes by up to 35pc is indefensible.”

He added, “Mandate and our members in Tesco have been overwhelmed by the support received by the public and other trade unions. This is a defining moment for the trade union movement, and it’s a particularly important battle for all workers in the private sector. If a company as profitable as Tesco can cut pay and conditions for long-serving staff without agreement, then it doesn’t bode well for other workers in our economy.”

Alke Boessiger, Head of Uni Commerce at Uni Global Union also pledged support from the international trade union movement by saying, “When Tesco workers take their stand, they will have the support of 20 million Uni Global Union members who will be standing with you.”

Stevie Fitzpatrick, Communications Workers’ Union General Secretary who also attended the Mandate conference said: “Our members in the postal and telecoms sectors recognise the threat that Tesco’s behaviour has for them, and they are fully prepared to back the Tesco workers.”

Mandate represent more than 12,500 workers in Tesco and more than 99pc of their 1,000 members effected by the cuts in Tesco voted in favour of industrial action last Friday, 15th April. The union is now conducting a second ballot of their 11,500 other members in support of the pre-96 staff.