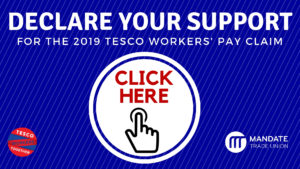 Mandate’s Assistant General Secretary Gerry Light is today (Wednesday, 3rd April 2019) launching the 2019 Tesco Pay & Benefits Claim. All Tesco workers are encouraged to view the claim and support it by signing the linked petition. You can view the claim here and sign the petition here.

It’s that time of year again when your union serves an annual pay and benefits claim on your employer Tesco Ireland. Such a claim is an effort to win recognition for the hard work and dedication shown by you the members to the Tesco business over the past 12 months.

In putting the various parts of the claim together we have been guided by you and your fellow members and the issues that you have identified as priorities through your active collective participation in recent national membership surveys. The claim was also recently endorsed by a national meeting of Shop Stewards.

This year the claim is as follows. On the issue of pay we are seeking the introduction of a pay scale with a starting point of no less than €11.90 per hour (Living Wage) and a top point of no less than €16.00 per hour. The introduction of this type of a structure will go a long way to ensure greater pay equality amongst all workers in Tesco which is something that is crucially important to many of you. We are also calling for the creation of 1,000 full time jobs along with fairer work roster scheduling and significantly full recognition of your right to be individually and collectively represented by Mandate Trade Union.

We believe the claim is both reasonable and achievable from a business that was only recently described by its CEO in a letter to staff as being in a “strong position”.

Do not underestimate the part of your claim that demands your right to be fully represented by your union. Over the past 3 years despite being formally requested to do so Tesco have failed to collectively engage in order to negotiate and agree your pay and other benefits. Instead management decided, without giving workers a say, what pay increase they believed you deserved. This year we must vow to bring this dangerous practice to an end for if we don’t your employer will ultimately end up determining the full range of terms and conditions that you will work for and more importantly how you will be treated whilst at work in the future. You along with your fellow union members have the absolute right to determine your value to the Tesco business and not have management decide it for you.

As late as two weeks ago your union, not for the first time, wrote to your employer seeking meaningful engagement. On Friday last we received a response which clearly fails to accept our invitation.

Be under no illusion come June of this year Tesco management is likely without any reference to you or your Union to announce a pay increase. But the claim I have just outlined is about more than a pay increase it goes to the very heart of being treated with dignity and respect at work and also ensures what you have you hold. Like any other claim it has a much greater chance of being successful if it belongs to and is supported and driven by you the members. Attached to this video you will find a link to an online petition which gives greater detail of this year’s pay and benefits claim along with an opportunity to declare your support for it. I would urge each and every one of you to complete the petition without delay. Your employer needs to know we are serious in our demands and this is the best way of leaving them in no doubt.

We are already seeing signs that our members are tiring of the way they have been treated by Tesco over the past 3 years. Prior to Christmas we witnessed 2 strikes in Sligo and Carrick-on-Shannon where your fellow members employed in those stores made a stand for decency and respect not only for themselves but for all of their fellow union members. The same level of fighting spirit is now required to support and deliver the pay and benefits claim which we intend to send to your employer today. As proven in the past none of the current terms and conditions that you currently have were won without a fight through the determination of our members acting collectively and sticking together in their union.

The same is true of the current claim which we all need to define as a turning point in the relationship with your employer when you the proud members of Mandate Trade Union use your collective power to ensure you are treated with the dignity and respect that you are entitled to.

So don’t forget sign the petition now and always remember together we are stronger.